He fought the good fight.

Here is the full press release from Sony.

CULVER CITY, CALIF. (November 8, 2020) –JEOPARDY!is saddened to share that Alex Trebek passed away peacefully at home early this morning, surrounded by family and friends.He was 80 years old. Alex was diagnosed with pancreatic cancer in March 2019, and he continued to host JEOPARDY! for the next 18 months. Throughout that time, Alex was open and public about his battle with cancer. JEOPARDY! episodes hosted by Alex will air through December 25, 2020 (his last day in the studio was October 29). The show is not announcing plans for a new host at this time. Born in Sudbury, Ontario, Alex hosted dozens of game shows before becoming the host of JEOPARDY! in its syndicated debut in 1984.He hosted more than 8,200 JEOPARDY! episodes over the course of nearly 37 seasons, setting a Guinness World Record for hosting the most episodes of a single game show. Alex won the Daytime Emmy® Award for Outstanding Game Show Host seven times and was honored with Lifetime Achievement Award from the National Academy of Television Arts and Sciences. He received the Order of Canada honor from his native land in 2017. “This is an enormous loss for the JEOPARDY! staff, crew and all of Alex’s millions of fans.He was a legend of the industry that we were all lucky to watch night after night for 37 years. Working beside him for the past year and a half as he heroically continued to host JEOPARDY! was an incredible honor. His belief in the importance of the show and his willingness to push himself to perform at the highest level was the most inspiring demonstration of courage I have ever seen. His constant desire to learn, his kindness,and his professionalism will be with all of us forever,” said Mike Richards, JEOPARDY! Executive Producer. Alex is survived by his wife of 30 years, Jean, and children Matthew, Emily, and Nicky. The family has announced no plans for a service, but gifts in Alex’s memory could go to World Vision. “Today we lost a legend and a beloved member of the Sony Pictures family,” said Tony Vinciquerra, Chairman and CEO of Sony Pictures Entertainment.“For 37 amazing years, Alex was that comforting voice, that moment of escape and entertainment at the end of a long, hard day for millions of people around the world. He was the heart and soul of JEOPARDY! and he will be deeply missed by everyone who made him part of their lives. Our hearts go out to Jean, Matthew, Emily, and Nicky.” “We join our colleagues at Sony Pictures in mourning the passing of Alex Trebek,” said Kenichiro Yoshida, Chairman, President and CEO, Sony Corporation. “Alex was an extraordinary talent whose intelligence, wit and comforting presence appealed to millions of people around the world and made JEOPARDY! the outstanding show it is today.”'

He was also one of the GOATs. RIP, Alex.

I really hope local television throughout the nation finds a way to avoid preempting his last show. I'm sure watching it will be a very emotional experience for his millions upon millions of fans. I know that it will be for me. --Bob
"Question with boldness even the existence of a God; because, if there be one, he must more approve of the homage of reason than that of blindfolded fear." Thomas Jefferson
Top

Do we know when his last show will be broadcast?
You live and learn. Or at least you live. - Douglas Adams
Top

Last of Alex's shows will be 12/25 according to the press release.

In other words, the day of the NBA triple header/ quad header, split between ABC and ESPN.
#ignorehashtags
Top

My plan is to organize people now to write to their local stations asking them to find a way to air Alex's last show at an accessible hour. --Bob
"Question with boldness even the existence of a God; because, if there be one, he must more approve of the homage of reason than that of blindfolded fear." Thomas Jefferson
Top

Losing Regis and Alex in one year. 2020 has been tough in a lot of ways.
Check out our website: http://www.silverscreenvideos.com
Top

Watch ABC at 10:00 p.m. tonight (I assume 9:00 p.m. in the Central and Mountain time zones) for a 20/20 special honoring Alex Trebek. --Bob
"Question with boldness even the existence of a God; because, if there be one, he must more approve of the homage of reason than that of blindfolded fear." Thomas Jefferson
Top

Ryan Reynolds revealed today that Alex filmed a cameo for his new movie Free Guy. The movie was originally scheduled to play this summer, but there's no current release date. Since it's a Disney movie, it's possible it may show up on Disney Plus.
Check out our website: http://www.silverscreenvideos.com
Top

Such a loss. RiP
To argue with a person who has renounced the use of reason is like administering medicine to the dead. -Thomas Paine
Top 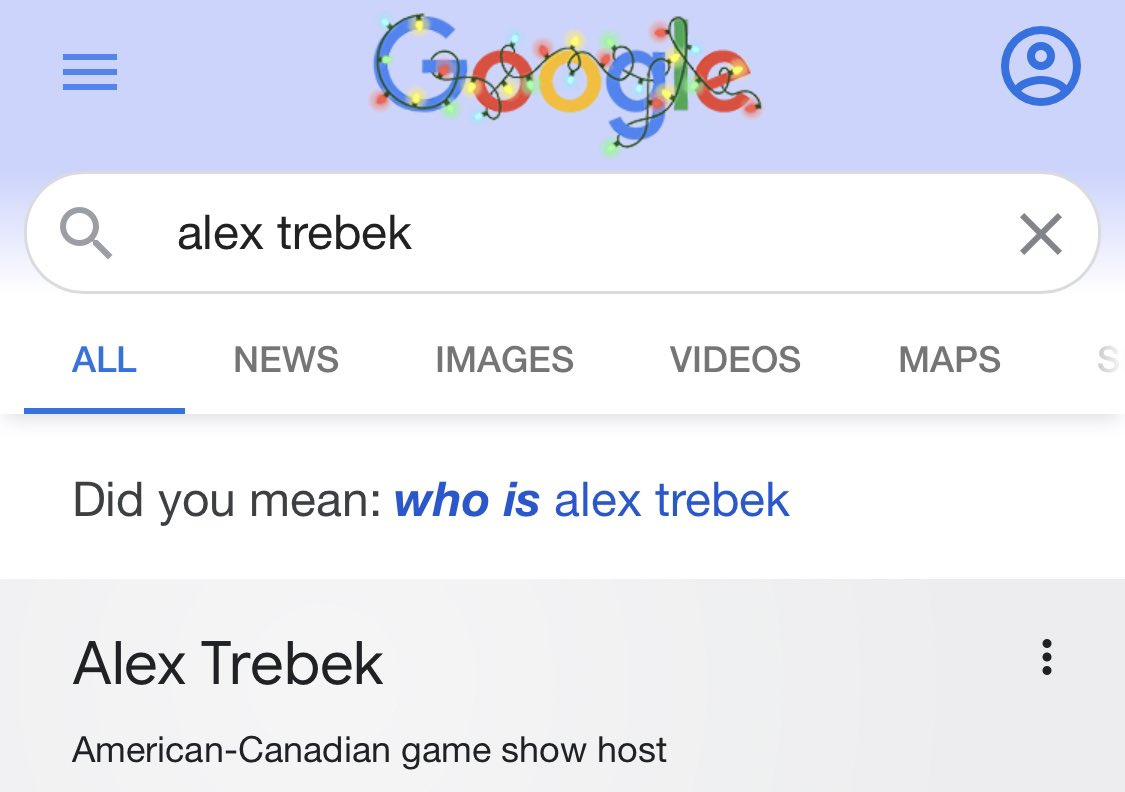