My Saturday schedule just freed up somewhat since the Georgia Tech-Pitt game scheduled for Saturday has been postponed. That was followed shortly afterward by the Rice-Louisiana Tech game. That makes 10 games postponed or canceled this weekend and counting. Tech-Pitt will be played December 12... hopefully.
Check out our website: http://www.silverscreenvideos.com
Top

On the plus side - Pretty sure that the Vols are not going to lose this weekend.
Jaybee
Top

When life gives you lemons, you make lemonade. The Cal-Arizona State and Utah-UCLA games this weekend were canceled due to positive results on the Arizona State and Utah teams. So, Cal and UCLA, who were not scheduled to play this year, will play Sunday at the Rose Bowl. As a result, UCLA's game against Oregon, which had been scheduled for next Friday, will be played on Saturday instead.
Check out our website: http://www.silverscreenvideos.com
Top

silverscreenselect wrote: ↑
Thu Nov 12, 2020 5:00 pm
My Saturday schedule just freed up somewhat since the Georgia Tech-Pitt game scheduled for Saturday has been postponed. That was followed shortly afterward by the Rice-Louisiana Tech game. That makes 10 games postponed or canceled this weekend and counting. Tech-Pitt will be played December 12... hopefully.

A couple of interesting notes on the fallout this weekend:

1) This is the second time ever since the Atlanta Falcons began play in 1966 that the Falcons, Georgia, and Georgia Tech are all off on the same weekend during football season. The Falcons' bye is this weekend, and Tech and Georgia had their games postponed due to COVID outbreaks. The only other time was the weekend after 9/11 when all NFL and college football games were postponed.

2) The Masters came to the aid of SEC football TV programming this week. With the postponements, the only three games on the schedule are Vanderbilt-Kentucky, South Carolina-Mississippis, and Arkansas-Florida. Since the first two aren't exactly big draws, the SEC would have had a problem filling its timeslots with popular games. However, CBS, which usually televised a 3:30 SEC game, will be covering the Masters today, and ESPN will put the Arkansas-Florida game on as its Saturday night primetime telecast.
Check out our website: http://www.silverscreenvideos.com
Top

My younger granddaughter, Brittany, has the virus. She and her girlfriend got infected by a friend of theirs last weekend.
I may not have gone where I intended to go, but I think I have ended up where I needed to be.
- Douglas Adams (1952 - 2001)

Boeheim, 75, said the positive result turned up following the most recent round of regular testing the Orange received as they ready for the 2020-21 season. He said he is currently asymptomatic and isolating at home.

SEC has pulled the plug on the Texas A&M - Ole Miss game this Saturday.

This would leave CBS without an SEC game for the second week in a row. (Last week there were only three SEC games left, and I don't think they were crying too much because they had The Masters most of the day anyway.) Not sure if they will swing a game away from ESPN to cover it; the game choices are less than appetizing. Logically, they'd grab the Alabama-Kentucky game, if only because the change in time would be minimal and make for less of a logistical nightmare (3:30 at CBS vs the current 4:00 pm ESPN start).
#ignorehashtags
Top

Last night, NCIS New Orleans and NCIS Los Angeles both had their second episodes of the season and they couldn't have been more different in terms of acknowledging the coronavirus. The New Orleans episode was the conclusion of a two-part episode that did a great job in depicting the effects of the virus on the city (the episode takes place in March or April during the lockdown). The main storyline deals with a murder on a ship bringing in medical supplies to help fight the pandemic.

NCIS LA, on the other hand, completely ignored the virus. The story takes place in November 2020 (there's a calendar with days circled that clearly indicates the date), but the episode itself is pretty much par for the course for the show. However, nobody acts like there ever was a pandemic. No masks, no social distancing, no mentions of any effects of the virus. It's as if Trump got his wish three or four months ago and it magically went away.

By the way, tomorrow's premiere of parent show will be a flashback episode that shows what happened in the show's timeline in one of the gaps in continuity. The second episode will also be a flashback, showing how Mark Harmon's character first met David McCallum.
Check out our website: http://www.silverscreenvideos.com
Top

Georgia Tech has had a game postponed for the second week in a row. The Tech-Miami game scheduled for Saturday will be postponed until December 19, the day of the ACC championship game. However, if Miami, which currently only has one conference loss, would qualify for the championship, then the Tech-Miami game would not be played. That scenario would require (1) Miami winning its remaining conference games and either (2) Clemson losing one more game or (3) Notre Dame losing two more games. The Miami-Wake Forest game set for next week has also been postponed for one week until December 5. That move required rescheduling three other games for late November and December.
Check out our website: http://www.silverscreenvideos.com
Top

AlphaDummy has tested positive. --Bob
"Question with boldness even the existence of a God; because, if there be one, he must more approve of the homage of reason than that of blindfolded fear." Thomas Jefferson
Top 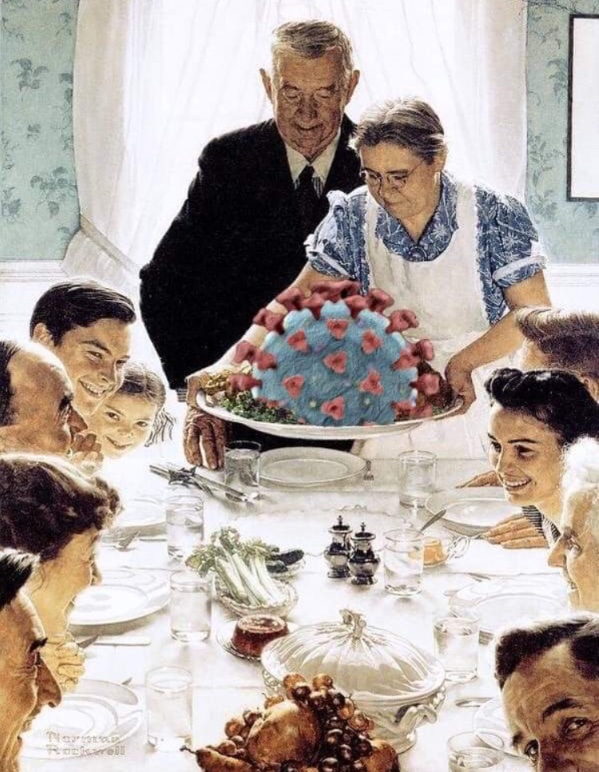 Warner Brothers has announced that Wonder Woman 1984, its next big release, will debut on Christmas Day both in theaters and on HBO Max (Warner owns HBO). Disney earlier announced that its latest Pixar animated film, Soul, will debut Christmas Day exclusively on Disney Plus. In both cases, subscribers will not have to pay any additional premium to see the movies, unlike Mulan, which cost $30 additional when it debuted on Disney Plus (Mulan will be free to Disney Plus subscribers next week).

Since Tenet debuted at Labor Day to a disappointing box office (it's still playing most places), the major studios have postponed their major releases. The only films to debut theatrically since then have been mid-to-lower range efforts like The War with Grandpa and Freaky.
Check out our website: http://www.silverscreenvideos.com
Top

Former Notre Dame football coach Lou Holtz, who made several appearances with Donald Trump at campaign rallies, has tested positive for the coronavirus. Holtz is 83.
Check out our website: http://www.silverscreenvideos.com
Top

The Great Barrington Declaration - an interesting read.
To argue with a person who has renounced the use of reason is like administering medicine to the dead. -Thomas Paine
Top

Phillip Fulmer, the AD at the University of Tennessee, has tested positive for COVID.

While he's one of my least favorite folks in college football, I don't wish this virus on anybody. I sincerely hope he gets well soon.
#ignorehashtags
Top

They may want to rethink a few things in light of recent events.
Check out our website: http://www.silverscreenvideos.com
Top

So has Rudy Giuliani's son, Andrew. He was at that press conference yesterday.
Check out our website: http://www.silverscreenvideos.com
Top

The ACC has announced that today's Clemson at Florida State game is postponed. The announcement came about four hours prior to the scheduled noon kickoff today.
#ignorehashtags
Top

Georgia Senator Kelly Loeffler has tested positive for the coronavirus on Friday, but a subsequent test on Saturday was inconclusive. She is currently isolating and will undergo further tests to be sure. Loeffler appeared with fellow Senator David Perdue and Vice President Mike Pence at a two rallies on Friday. None of them were wearing masks. Both Loeffler and Perdue are involved in tightly contested runoff elections here in Georgia against Democrats Jon Ossoff and Raphael Warnock. Loeffler's opponent Warnock has already extended best wishes to Loeffler.
Check out our website: http://www.silverscreenvideos.com
Top

Los Angeles County has ordered restaurants throughout the County to stop offering outdoor seating (i.e., to limit themselves to takeout and delivery). The order will take effect Wednesday night at 10:00 p.m. PST and will last for at least three weeks. (The stories aren't clear, but I suspect the order doesn't apply in Long Beach or Pasadena, because each of those cities has its own health officer. But I also suspect those health officers will likely follow the County's lead if they haven't already done so.)

Walking up to the local open-air food court for lunch has been a way for me to achieve some human contact, unmediated by electronics, since the summer. Not my only way, but an important one. I really wish Spock had been right. --Bob
"Question with boldness even the existence of a God; because, if there be one, he must more approve of the homage of reason than that of blindfolded fear." Thomas Jefferson
Top

All high school football has been canceled here in Pima County, Arizona.
I may not have gone where I intended to go, but I think I have ended up where I needed to be.
- Douglas Adams (1952 - 2001)

Wisconsin's game against Minnesota this weekend has been canceled, the first time in 113 years the two teams have not played. That's the third Wisconsin game this season to be canceled, meaning that they will play a maximum of a five-game schedule. That might have caused an awkward problem for the BCS championship if they had managed to go unbeaten. However, their loss to Northwestern last weekend pretty scrubbed that possibility.
Check out our website: http://www.silverscreenvideos.com
Top

A note to food workers: wearing gloves is good; wearing your fingernails so long and pointy that all ten of them poke through the end of your gloves - not so good.

To argue with a person who has renounced the use of reason is like administering medicine to the dead. -Thomas Paine
Top

University of Alabama head coach Nick Saban has tested positive for COVID (again), though this time looks like it's the real deal since he is showing mild symptoms.

He will not be in attendance at the Iron Bowl on Saturday, and Steve Sarkisian will be acting HC for the game.
#ignorehashtags
Top
Post Reply
615 posts