$500
Though in real life it could damage the equipment, TV doctors are often shown rubbing defibrillator paddles together before shouting what word?
A: Whaaaasup!? B: Booya!
C: Smile! D: Clear!

$1,000
Taking up two full pages and featuring 728 clues on a separate page, in 2016 the NY Times published a special feature called the Super Mega, which was a what?
A: Crossword puzzle B: Comic strip
C: Wedding announcement D: Mattress store ad

$2,000
A recent non-fiction bestseller about American traitor Brian Regan, whose dyslexia led to his 2001 capture, is titled “The Spy Who Couldn’t…” what?
A: Speak B: Spell
C: Sing D: Swim

$3,000
According to Lifehack.com, removing a splinter can be painless, if you cover the area with what white substance, let it dry, and peel it off?
A: Elmer’s glue B: Non-dairy creamer
C: Baby powder D: Bug spray

$5,000
We’re not calling it nepotism, but the peppy theme song to the sitcom “30 Rock” was composed by Jeff Richmond, the husband of whom?
A: Amy Poehler B: Tina Fey
C: Julia Louis-Dreyfus D: Debra Messing

$10,000
Of all the teams who play in the NFL, the NBA, the NHL and MLB, the one whose nickname comes last alphabetically plays in what city?
A: Washington, D.C. B: Oakland
C: New York City D: Minneapolis

$20,000
In the eight years he was president, George Washington never did which of these things?
A: Step foot in the White House B: Give a State of the Union address
C: Veto a bill D: Appoint a Cabinet member

$30,000
Given its mascot, if you have coulrophobia, you might want to avoid what restaurant chain?
A: Panda Express B: McDonald’s
C: Chuck E. Cheese’s D: Hooters

QotD
“Draughts” is the British name for what popular game?
A: Checkers B: Chess
C: Backgammon D: Bridge

BBTranscriptTeam wrote:$20,000
In the eight years he was president, George Washington never did which of these things?
A: Step foot in the White House B: Give a State of the Union address
C: Veto a bill D: Appoint a Cabinet member

Michael Beschloss wrote:George Washington, depicted during one of his visits to survey White House construction, 1798, painted by N.C. Wyeth: 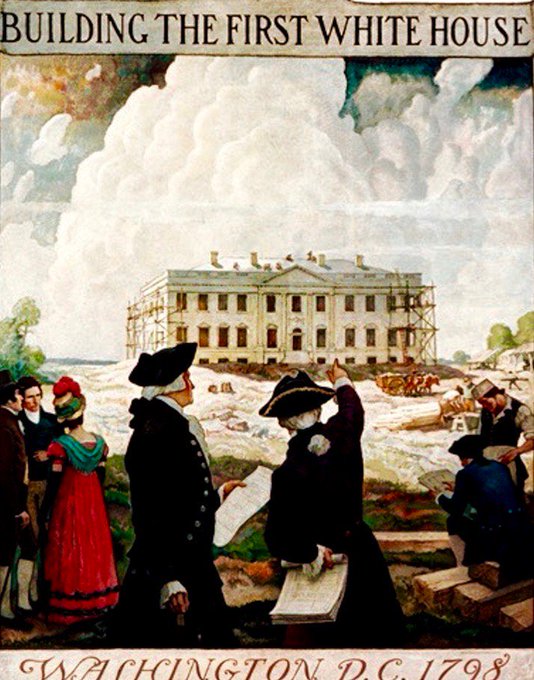 He's outside the building and no longer president, but this is just one of his visits, so it's conceivable that he stepped foot inside as president. Regardless, the other three answers are definitely wrong.
Top